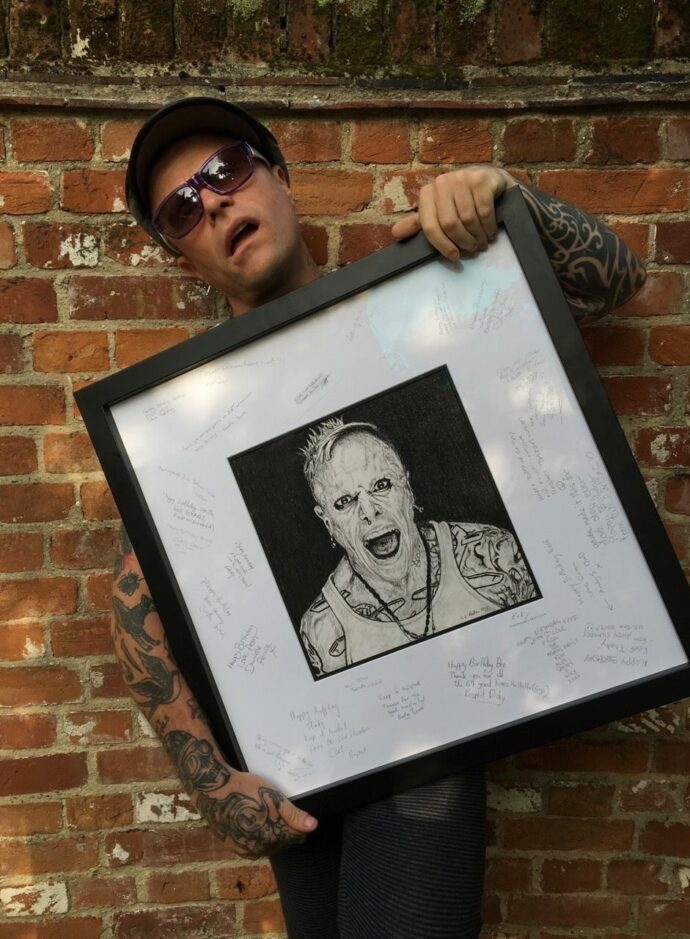 Thank you to everyone who bought a copy of my Keith Flint charcoal portrait.
The print run of 100 has now sold out.
Back in 2016 I was commissioned by members of The Prodigy Dirtchamber Facebook Crew to create the original portrait as a present to Keith from them for his Birthday.
We travelled to Keith’s pub The Leather Bottle, Pleshey on his Birthday, 17 September 2016 to present the portrait which was signed by everyone and expertly framed on the day by Steve Baxter of Anything Framed.
A fantastic day was had which has since gone down in Prodigy fan history as a classic.
Many friendships were made and people travelled from across the UK and Europe.
I have had some amazing times with these friends at Prodigy gigs and gatherings since.
A limited print run of the portrait was started so that fans could have their own copy and these have shipped to fans worldwide.
–
Devastating news hit in early March 2019 and this was so incredibly hard to take, believe and comprehend.
I struggle for words to justify the feelings and mood experienced after Keith’s passing.
Many of the friends I had first met at Keith’s pub were present at the funeral in late March and we did pay our respects and ‘Raise The Roof’ for Keith on that sad day.
–
In true warrior style, a crowd funding scheme was started by Prodigy fans from around the world to bid for the original portrait when it went for auction in November 2019 as a part of Keith’s personal possessions.
The portrait went to an unknown telephone bidder but the crowdfunding effort came very close to getting it.
This effort was recognised by the remaining Prodigy band members, Liam and Maxim.
A special badge (that was made for friends and family for the day of Keith’s funeral) was posted from them to all of the fans who had contributed to the fund to try to get the portrait at auction. A moving note was included with the pin finishing with the words;
‘Represent our brother and his lasting legacy. Wear it with pride’
Such integrity and a truly wonderful gesture.
I hope the portrait can play a small part in helping us all remember ‘Keef’.